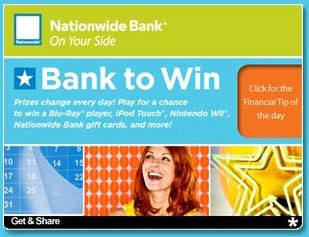 Sign in each day with your eDecoder game piece to see if you’ll be an instant winner. Each time you play, you’ll automatically be entered in the November 5th prize drawing for the chance to win an all-expenses-paid trip to Las Vegas, including tickets to see a Nationwide Series® race while you’re there!

Eligibility: open only to legal residents of the fifty (50) United States and the District of Columbia (excluding Colorado) who are eighteen (18) years old and older at the time of entry. Void in Colorado and where prohibited.

How to Enter: Visit nationwidebank.com/banktowin to get started. You will need an eDecoder to play the eDecoder Game. eDecoders will be distributed through the mail or you can obtain an online virtual eDecoder when you register for the Promotion.

Sweeties Note: You have to watch the first video to get to the decoder page. There is no way around it so sit back and enjoy or open another window and enter another sweepstakes while it plays.

Tell A Friend Program: After you play the eDecoder Game, you will be invited to submit the names and email addresses of up to three (3) friends who must eligible to enter the Promotion.

Sweepstakes Drawing: Administrator will randomly select the potential Grand Prize Drawing winner from all eligible entries received on or about November 5, 2009.

Sent in by: Christy (sp00kyprincess)