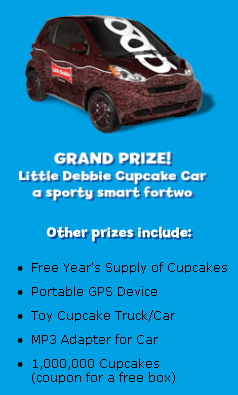 Little Debbie Cupcakes can put a smile on your face and a car in your driveway. For your chance to win one of these sweet rides, a sporty smart fortwo, plus other great prizes.

ELIGIBILITY: The Giveaway is open only to legal residents of the forty-eight (48) contiguous United States and the District of Columbia who are 18 years of age or older at the time of entry.

HOW TO ENTER: visit www.littledebbiecupcakes.com

Entry Limit: One (1) entry per person and/or per email address per day during the Promotion Period.

All non-winning entries from previous drawing will be rolled over into subsequent Weekly or Monthly Entry Periods. Grand Prize Winner will be notified by phone and/or email, and confirmed in writing via mail or other form of home delivery, within ten (10) days of the drawing.

Sent in by: Heather and Elle