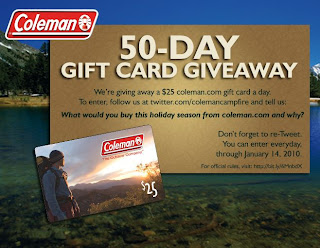 Eligibility: is open only to legal residents of the fifty (50) United States (including the District of Columbia), who are 18 years of age or older at the time of entry.

Here’s how to participate:

Tweet an answer to the question, “What would you buy this holiday season from Coleman.com and why?” with an @ColemanCampfire in your Tweet.

One winner will be announced each day on the @ColemanCampfire Twitter page starting on November 26, 2009. If it’s you, make sure to send a Direct Message (DM) via Twitter within 72 hours. Remember, all entries for each day’s Giveaway must be received by 11:59 p.m. EST on that day.

Entry Limit: one entry per day per person/Twitter address

Potential winners will be notified via the @ColemanCampfire page on ColemanCampfire and asked to Direct Message contact information to @ColemanCampfire. If any winner notification remains unanswered for more than seventy-two (72) hours, the prize will be forfeited in its entirety.

Instructions for using Twitter to win prizes and how to find out if you are a Twitter contest winner.