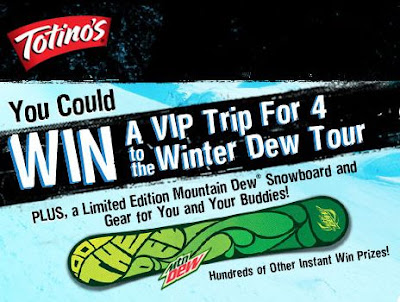 You could win a trip for 4 to a 2010-2011 Dew Tour snowboarding event when you enter the Totinos Winter Dew Tour Sweepstakes.

Eligibility: open only to legal residents of the fifty (50) United States and the District of Columbia who are at least thirteen (13) years old, except for residents of Maine who must be at least eighteen (18) years old, at time of entry.

How to enter: Visit www.totinos.com and click on the banner.

Entry Limit: Each participant may enter/play one (1) time per day by any method, or combination of methods of entry during the Promotion Period.