Mike’s wants to give you every opportunity to rock this year. Enter your info and cap code for the chance to win weekly music downloads from WARNER MUSIC GROUP and also the year-end grand prize.

At the end of the year, one grand prize winner will receive a mike’s HARD PUNCH ROCKS weekend for four in one of three cities

Eligibility: Entrants must be 21 years old or older at the time of entry. Open to legal residents of the U.S.A. excluding residents of California or Utah.

How to Enter: Visit www.mikeshard.com/sweeps-enter

You will need a code to enter. 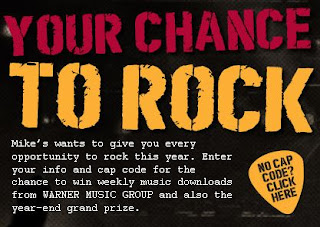 Get Codes Online: Entry codes are also available without purchase by online request at website. (Limit one request per person, per email address, per day).

Mail-in for Codes: print your name, address (no P.O. Boxes), daytime and evening telephone numbers, date of birth and the words “mike’s HARD PUNCH™ ROCKS Sweepstakes” on a 3″ x 5″ card and mail to:

GRAND PRIZE: One Grand Prize winner will receive either a trip for four to his or her choice of ONE of the following destinations (London, New York, or Los Angeles), for five days and four nights, or $12,000 in cash.

FIRST PRIZE: 5 first prizes of a Gibson® USA Les Paul Studio guitar, having an approximate retail value of $1,900.00 each; or a prize of equivalent value will be awarded.

THIRD PRIZE: 50 third prizes of mike’s HARD PUNCH™ ROCKS T-shirts, having an approximate retail value of $15.00 each; or a prize of equivalent value will be awarded.

WEEKLY FIRST PRIZE (One winner per week, 52 in total): 500 song downloads, having an approximate retail value of $495.

Final Drawing: All eligible entries received during the Promotion Period will be entered into a random drawing held on/about 1/21/2011 (the “Final Drawing”) to select the winners of: One (1) grand prize, five (5) first prizes, five (5) second prizes; and (50) third prizes (prizes are described in detail in Rule 3). Limit one (1) Final Drawing prize per person, household or email address. Entries of winners of the Weekly Drawings will be included in the Final Drawing.

Prize Limit: one (1) Weekly Drawing prize per person, household, or email address during the Promotion Period.

Sent in by: Allison