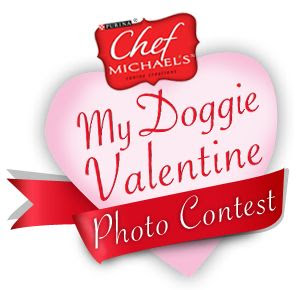 You and your dog-loving readers can join Chef Michael’s “My Doggie Valentine” contest for the opportunity to win a trip for 2 to NYC and attend the first-ever “Be My Valentine Doggie Dinner Party” on February 10! The winner will also receive $1,000 in cash and a one-year supply of Purina Chef Michael’s canine creations. The first 1,000 entrants will receive a special Valentine gift.

Do you hold a special place in your heart for your dog? Is your dog more like a best friend or a true partner than your pet? Love is in the air this February, and this time Cupid has his eye on dogs and their human companions, as more than 60 percent of dog owners plan to include their dogs in their Valentine’s Day celebrations. Dogs have already claimed the title of Man’s Best Friend, and now they’re part of a new tradition that has their owners proclaiming the four-legged loves of their lives their “Doggie Valentines.”

Purina® Chef Michael’s® canine creations is celebrating the unique relationship between dogs and owners with the launch of the “My Doggie Valentine” contest starting Jan. 6, 2010. The lucky winner will get an all-expenses-paid trip to New York City to attend the Chef Michael’s Be My Valentine Doggie Dinner Party on Feb. 10, 2010, at Gotham Hall, one of the city’s most prominent and prestigious social event venues.

A surprise celebrity judge will select the winning dog in the contest, which takes place now through Jan. 25, 2010 on www.doggievalentine.com.

Dog owners across the country are invited to enter by submitting a color photo of their dog along with a caption that describes why their dog is their Valentine. Entries will be judged on the “unforgettable face” in the photo, the originality of the caption and the appropriateness of the entry to the contest’s loving theme. For every valid entry, Chef Michael’s will donate $10 (up to $7,500) to Adopt-a-Pet.com to support its mission to find forever homes for homeless dogs that also deserve to feel loved on Valentine’s Day.

The prize package for the winner of the “My Doggie Valentine” contest includes:

The first 1,000 entrants meeting the entry requirements will also receive a Doggie Dinner gift package that includes samples of Purina Chef Michael’s canine creations – so that they can treat their dog to a special, thoughtfully prepared meal beyond Valentine’s Day.

ELIGIBILITY: Contest offered only in the 50 United States and the District of Columbia to legal residents of the U.S. who own one or more dogs and, at the time of entry, are 18 years of age or older. Entrants under the age of majority (21 if a MS or DC resident, 19 if an AL or NE resident, 18 in all other states) must have their parent’s or legal guardian’s permission to enter. Open to amateur writers and photographers only. Persons who have been paid for a personally-produced essay, article, or photo are ineligible.

ENTRY LIMIT: one entry per person, email address, or household.

ROUND ONE JUDGING: All eligible submissions received within the entry period will be judged by the Judges based on the following criteria using a scale of up to 20 points:

Using these judging criteria, five (5) finalists will be selected and those entries will move to ROUND TWO JUDGING.

ROUND TWO JUDGING: Each of the Finalist entries will be reviewed and judged by an independent spokesperson designated by Sponsor, who will utilize the judging criteria listed above in ROUND ONE JUDGING and one Grand Prize winner will be determined.

WINNER NOTIFICATION: The Grand Prize winner will be notified by e-mail and by overnight mail on or before January 27, 2010.

PRIZE: Grand Prize winner will receive a trip to New York City for two people (one at least 21 years of age or older; the other at least 18 years of age) to attend the Chef Michael’s® Be My Valentine Doggie Dinner Party on February 10, 2010. The Grand Prize winner may also bring up to two qualifying dogs. Qualifying dogs must be owned by the Grand Prize winner, in the winning photo, weigh 25 lbs or less, must not be aggressive (subject to the sole determination of Sponsor), and must be up-to-date with all required vaccinations. No exceptions or substitutions will be permitted. Prize includes roundtrip coach airfare for two (2) adults and up to two qualifying dogs, four (4) nights hotel accommodations in a dog-friendly hotel, a one year’s supply of Purina® Chef Michael’s® canine creations dry dinners, any variety (provided in the form of 25 manufacturer’s coupons, each redeemable for one package, up to 11.5 lbs, retail value up to $24.99 for each coupon, maximum retail value: $624.75), and $1,000 spending money in the form of a prepaid gift card from a reputable credit card provider (total estimated value of the Grand Prize: $6,624.75).

According to a Purina survey, 66 percent of dog owners plan to show their dog how much they love him or her on Valentine’s Day by showering the dog with hugs and kisses, while 56 percent prefer to show their love through a special meal topped off with their dog’s favorite treat.