Yet another good instant win game that ends today. I posted this back in May so this is a good reminder to enter again.

Enter for your chance to win 1 of 8 spectacular family vacations to Universal Orlando Resort. Grand prize trips include air, hotel, theme park tickets and more! Then, play the Spin to Win game and see if you’ll win a pair of 1-Day/2-Park theme park tickets instantly!

Thanks again to Tracy for sharing this giveaway.

Eligibility: open only to legal residents of the fifty (50) United States (including District of Columbia) who are at least eighteen (18) years old at the time of entry.

How to enter: Visit universal.promo.eprize.com/always and fill out the online entry form.

Entry Limit: Each participant may enter the Sweepstakes and play the Instant Win Game one (1) time per day during the Promotion Period regardless of which Web Site he/she visited to participate in the Promotion. 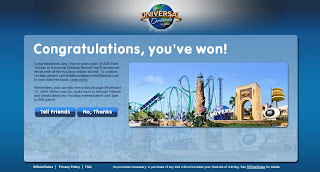 Drawing Dates: Grand prize drawings start June 6, 2009 and end January 6, 2010. There are 8 drawings throughout the period.