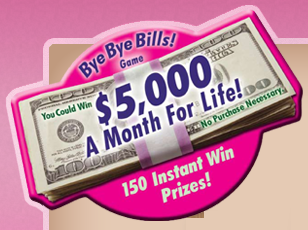 It took me so long to figure out the rules that I figure this must have really good odds for winning. You can play both by getting game piece on the product or by mail, or by playing online There are two sets of prizes for each portion of the game. The total prizes to be won is over 10,000. The odds of winning through the game pieces/mail is much better than online but it will cost you 88 cent in stamps to request one game piece. It’s probably cheaper to buy the food product. That way you have food to show for your money.

Eligibility: open only to legal residents of the fifty (50) United States and the District of Columbia who are at least eighteen (18) years of age or older as of September 15, 2009.

How To Obtain A Game Piece in the On-Pack Game: Starting on or about September 15, 2009, Game Pieces will be available on specially marked 15.5-ounce packages of Goya Blue Label Canned Beans and 8-ounce boxes of Goya Yellow Rice. For Goya Canned Beans, Game Pieces are printed on the reverse side of the can labels.

To request a Game Piece without making a purchase, send a self-addressed, stamped envelope to:

Mail-in requests must be postmarked by June 1, 2010 and received by June 15, 2010. Vermont residents with a return address located in Vermont may omit return postage. Limit one request per person, per mailing address and per household per day.

How To Play And Win The Online Game: Starting on September 15, 2009, you may participate in the Online Game by visiting the www.goya.com website. Upon visiting the website and completing the online registration form, you will be able to collect an Online Game Piece once per day per email address for the duration of the Online Game promotion period, no purchase necessary. Each day after logging on to the contest website you will receive either an Instant Win or a Collect-and-Win Game Piece.

There are two ways to win a prize:

Collect-and-Win: Each Collect-and-Win Game Piece you receive in the Online Game is one (1) month of the year. These Game Pieces will be stored on your own personalized Online Game board in the form of a calendar. To win the Grand Prize, you must collect all twelve (12) months of the year, January through December, subject to verification. If you collect all twelve (12) months of the year, you will be informed on screen and you will also receive an email with instructions on validating and claiming your Grand Prize.

Instant Win: If the Game Piece you receive indicates you are an Instant Winner (subject to verification), you will be informed on screen and will also receive an email with instructions on validating and claiming your Instant Win Prize.

Sent in by: Cheyanne21