This sweepstakes and instant win game was posted in January but I thought I would bring it back to the top of the homepage to give you an update. It is still going on until December.

She says: Since the ARV=$300 win just covers lodging and a one-day pass to Sea World (awesome!), all I need now is to win some airfare!! I hear San Diego is beautiful and I’ve never been there. Hopefully sometime within the next year, hubby and I will have the opportunity to take advantage of this win! 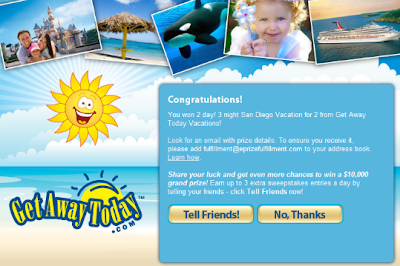 A Note about “Creative” Sweepstakes: When they talk about Creative online sweepstakes they mean that there are MANY sweepstakes participating in giving away the 1 prize they are offering which in this case is $10,000. If you enter this sweepstakes you will be entered to win that prize but everyone else in many other sweepstakes will also be entered. This brings the odds down considerably. They don’t tell you what other sweepstakes are eligible so you don’t know how many there are.

In this case, it does give you entries into the sweepstakes but the better odd is playing the instant win game.

Eligibility: The Promotion is open only to legal residents of the fifty (50) United States (including D.C.) who are at least eighteen (18) years of age at the time of entry.

How to Enter: Visit getawaytoday.eprize.net/triviasweeps

To play the Instant Win Game:

Entry Limit: Each participant may enter/play one (1) time per day during the Promotion Period. Multiple entrants are not permitted to share the same email address. 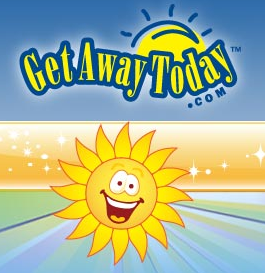 FOUR (4) GRAND PRIZES: One (1) Grand Prize for the Grand Prize Drawing will be awarded per Entry Period. The exact prize for which an entrant is eligible depends on the Creative Presentation through which he/she entered. The Grand Prize for a potential winner who entered through this Promotion will be $10,000. ARV: $10,000.

(4) FIRST PRIZES: Winner’s choice of a Southern California vacation for four (4) to one of the following destinations: (i) Disneyland; (ii) Universal Studios Hollywood; or (iii) San Diego, CA. ARV: $1,037.

The trips they are giving DO NOT INCLUDE TRAVEL expenses such as airline tickets!