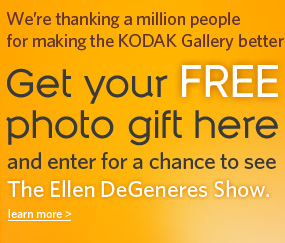 @Kodak is thanking a MILLION people for helping to make the Kodak Photo Gallery better.

Eligibility: Millions Thanks Giveaway is open only to legal residents of the fifty (50) United States and the District of Columbia who are at least eighteen (18) years old at the time of entry.

How to Enter: During the Promotion Period, visit kodak.promo.eprize.com/millionsofthanks and follow the links and instructions to complete the registration.

Entry Limit: Each participant may enter one (1) time during the Promotion Period.

Special Freebie Offer: 300,000 entrants who register for the Sweepstakes will receive a $15 digital gift code redeemable on the Kodak Gallery site. The Gift Codes will be distributed on a first come, first serve basis to entrants who register according to the following schedule while supplies last and not everyone will receive them as they are given out randomly. Others will receive a 40% discount coupon to use on the Kodak Gallery site. There is a limit of one Gift Code and up to three 40% off discount codes per entrant during the Promotion Period.

Limit: One (1) Gift Code and up to three (3) 40% off discount codes per entrant during the Promotion Period.

Sweeps Rating: Freebie Offer Winnable; Sweepstakes not so much.

Sent in by: Chatroom Peeps