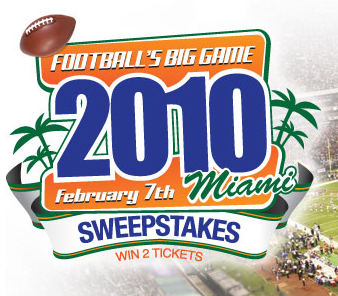 Football fans it’s time for the Saveology Football Sweepstakes where you could win 2 tickets to football’s big game on February 7, 2010 in Miami, Florida along with 2 roundtrip plane tickets, three nights stay, and $500 in spending money

How to enter: Eligible individuals can enter by answering survey questions and completing and submitting an online entry form at saveologysweepstakes.com/BigGame.

Entry Limit: one (1) entry per person per household.

Sweepstakes Drawing Date: The Grand Prize winner will be selected, from among all eligible entries received, in a random drawing on or about January 18, 2010, by American Sweepstakes & Promotion Co.