Many of our new readers are now starting to win much bigger prizes. Marti, a daily chatroom visitor, sent me this message about a trip she just won INSTANTLY. Marti said she got the codes to play by emailing for them. The instant win games have been paying off big time this year. I won $5,000 earlier this year and so did another reader and two people have won cars instantly here and here. 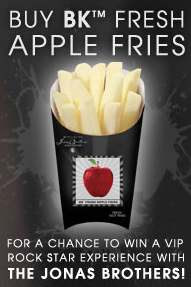 On June 30, 2009 I won a trip for 4 to Atlanta to see the Jonas Brothers from Burger King. I am absolutely thrilled about this trip. I will be taking my whole family. My eight year old daughter is so excited. It was the last day of the instant win and it was the last code I entered. I’m still in shock.

I started sweeping in March 2009. I just stumbled across your site and Im not really sure how but Im glad I did. I enter daily sweeps and instant wins everyday. Ive won some stuff along the way. So far this year Ive won approximately pretty close to $7500 in prizes. This includes the Jonas Bros Trip.

Thanks again for your site. I love it and I’m hooked on sweeping.

Eventually everyone who enters should win something big. It will only happen if you don’t give up too soon. Read the latest winner’s list this week.