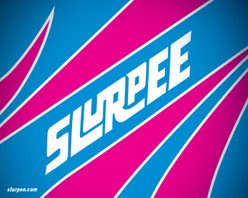 Start the day as a Slurpee lover and you could finish as an instant winner. Trade in your hard-slurped points for the chance to win big.

Eligibility: open only to legal residents of one of the fifty (50) United States or the District of Columbia who are thirteen (13) years of age or older at the time of entry.

How to enter: Visit www.slurpeenation.com. When you click this link it will take you to the alternative form where you can enter without needing codes. 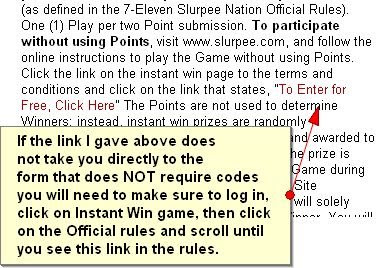 Entry Limit: five (5) Plays per person per Account per day during the Promotion Period.

Prize Limit: one (1) prize per name, address and/or household. Unclaimed prizes will not be awarded.

Drawing Info: Instant win prizes are randomly time-seeded throughout the Promotion Period and awarded to the first person who plays on or after the time the prize is randomly seeded. The time when you play the Game during the Promotion Period (as recorded by the Web Site technology) and the number of entries received will solely determine whether or not you are a potential Winner. You will receive an email message to the email address you used to register your Account within twenty four (24) hours of playing the Game. If you receive an email message stating, “Congratulations! You are an instant winner!” you win the prize stated (subject to verification). Non-winning email messages will read, “The bad news is that your entry was not selected as an instant winner.” To be eligible to win a prize, all Plays must be completed by no later 11:59:59 P.M. CT on July 31, 2009.