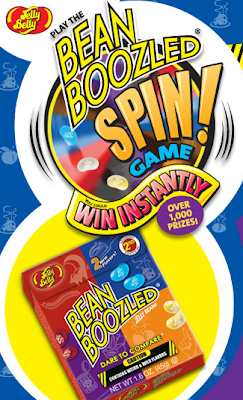 Play the Jelly Belly BeanBoozled Spin Game for your chance to instantly win over 1,000 prizes such as an iPod nano®, a Flip Camcorder and iTunes® gift cards. You will also be entered into our sweepstakes for your chance to WIN A 52″ FLAT PANEL HDTV just for playing!

Eligibility: open only to legal residents of the fifty (50) United States (including District of Columbia) who are at least thirteen (13) years old at the time of entry.

How to enter: Visit www.beanboozledspin.com

Tell A Friend Program: After you play the Instant Win Game, you will be invited to submit the names and email addresses of up to three (3) friends who must be eligible to enter the Promotion. Each person that you refer will receive an email notifying them about the Promotion. You may only refer persons with whom you have an existing relationship. For each referral of up to three (3) friends with valid email addresses, you will receive one (1) additional Instant Win Game play for that day.

Sweepstakes Drawing Date: on or around November 2, 2009.