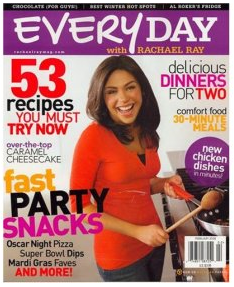 You could win a fabulous Girlfriend Getaway. See the Rachael Ray show live with 3 friends!

Eligibility: open only to legal U.S. residents who are at least the age of majority in the state in which they reside at the time of entry.

How to enter: Visit everydaywithrachaelraypromo.com/comfort

Entry Limit: One (1) entry per person.

Prizes: One (1) Grand Prize Winner will receive (i) a 3-day, 2-night trip for four to New York City including airfare, (ii) hotel accommodations, (iii) four tickets to the Rachael Ray show in New York City (iv) four tote bags filled with personal care items and (v) 500 for each of the winner and their three guests. (Tickets subject to availability between Sept. 2009 and April 2010 and taping dates may change due to production schedules. (ARV) of the Grand Prize is $4900.