Yes, it’s true. Melanie was in the chatroom late last night and told us she had just won a car from the Red Baron Single Smart Instant Win Game. Melanie has won a 2009 Smart fortwo base model vehicle, plus up to $2,010 for destination fee, title, license and other dealer fees. (ARV $16,000). She is one of only 12 winners. This instant win game is still going on until June so make sure you enter too.

Update! Red Baron offered Melanie her cash and she is getting $16,000 instead of the car. How’s that for an instant win!

Here is what Melanie told me and her winning screenshot:

I played the The Red Baron’s Single Smart Fortwo Coupe game at 12:20 am. It popped up Congratulations You Won..then it went to another screen (the one I sent you) that says….CONGRATULATIONS You won a 2009 Smart Fortwo Coupe! I got an email confirmation immediately afterwards. They said, I wouldn’t get it until the end of the game. I’m just still in shock!! I just keep saying to myself “I just won a car”….I won the Red Baron a few months also that time I won a Wii! That is my biggest prize until now. 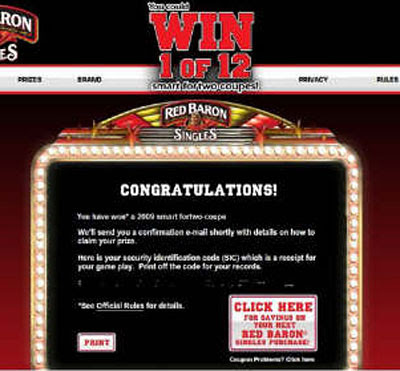 We can now add Melanie to our list of big winners here on Sweeties Sweeps!